"Rain or shine - We will be out!"
Translation: Hanna Häßlein

Not long after Metaprism's live show (link on the bottom of the page) on the W.E.T. Stage of the Wacken Open Air, I had a Video-Interview with the band. It convinced me all the way that I was just the happier to have sent the request to the right address. And neither a car with five seats for six band members, numerous roadblocks nor the weather and the consequent bulks of mud were able to prevent the show or the following meeting. 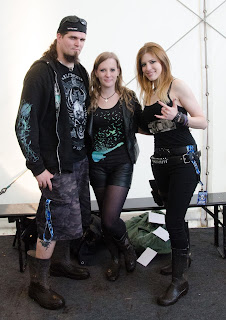 The band voices Theresa Smith and Jut Tabor aka Beauty and the Beast, whose Dual Fronted performance was especially fascinating and who turned out to be charming personalities even off stage, got into conversation. Topics of the interview were e.g. the show at Wacken, the festival itself, including Metal Battle, the meaning of the band name (:D), the music in general and naturally the new album "The Human Encryption" which will be released September 1st, the interaction between the two singers or what it is like as a woman to deal with so many guys.


Link to the Youtube-Video:
https://www.youtube.com/watch?v=GARnKocEbvA

Link to the bands audience on Wacken: (soon in english too)
http://www.realisart.com/2015/08/konzertbericht-fotos-metaprism-beim.html