Thereby, the essence of the latest masterstroke of the “power metalers” of Dawn of Destiny is already summed up.
The band managed to improve from album to album which finally lead to their first concept-album “F.E.A.R.”. This in turn, led to the question of how Dawn of Destiny is going to be able to top that. The answer is “To Hell”. 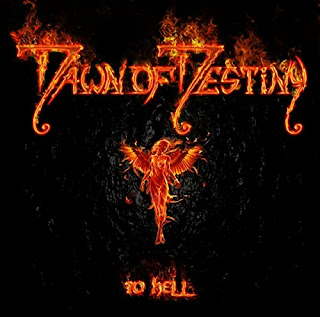 This already starts with the cover, which, at first glance, seems plainer than the other but effectively depicts the core of the album i.e. the motifs of fire and water as well as the motif of the suffering woman (angel and sinner at the same time). Beautiful in its simplicity and perfectly fitting with the story.
Unexpectedly, “To Hell” is yet another concept-album. It tells the story of Mary and Tim on a cruise ship during their honeymoon. They are being chased by Ibrahim, who is confronting Mary with her dark past, which has to do with the meaning of her tattoo “NA” and which he is hiding from Tim. Ibrahim is forcing Mary to make a gruesome choice.
At this point no more will be revealed as the suspense, which is created throughout the story and remains until the end, is an essential part of the album and makes it all the more appealing. This time, the story is not divided up into several parts but with each song the booklet changes between narrative and lyrics. Furthermore, the storyline deals with many current happening; it is about refugees. The mixture of actuality, suspense and drama completely convinces on the textual level; additionally the content also supports the music.

Musically, “To Hell”, is as catching as ever and, at the same time, a typical Faber-creation. The former is also due to the increased demand of complexity. The tendency could already be seen with the predecessor but is definitely enhanced here. With one or the other, “To Hell” may need a while to take full effect. This already starts with the first song “Hide Our Sorrow”, which initially is a bit bulkier than other DOD-openers but turns into quite the favorite after a while. The “men’s choir” musically reminds of a pirate song – matching with the ocean motif. It furthermore contains a great “stuck-in-the-head” chorus and a beautiful bridge. The mixture of (initial) bulkiness and catchiness is a very good example for the whole album. I don’t think I have ever heard an album which is so complex (many rhythm and melody changes, dissonant polyphony,…) and, at the same time, catchy and simple (referring to the chorus structure). It is this combination that has always been a Dawn of Destiny feature and it satisfies yet again with the latest publications. It is also the diversity on the track list that is supposed to appeal not only to fans.
“To Hell” contains classic, harder tracks (simple but effective) with cool guitar riffs (“Fire”, “To Hell”, “Scream”) as well as (musically) positive seeming songs such as “Admired” (“From Paradise”, “Life”) that enhance the album with emotional and atmospheric diversity. Fans of previous darker tracks are being satisfied, (“Hateful Heart”) or the balladic counterpart (“Destroy My World”) are examples for that.

All this is being carried by the band’s female singer Jeanette Scherff. The roughness in her voice, which is mainly seen live, is shown to advantage on this album. However, in addition to a lot of power and snotty-ness, she also presents other sides, which lead to the question whether or not a guest singer was involved as she is showing her soft side at the beginning of some phrases. Yet again, diversity is a topic as even inflected speech and emphatic or desperate parts are no problem for the lady from the Ruhr region. A good example for this is “Belief”, where she is thrashingly performing during the verses but delivers a melodic chorus.
The situation is similar with Jens Faber, who isn’t only the creator of all the songs and lyrics, but who also turned to the microphone himself. He too presented sides of himself which had been concealed or less pronounced until now. He elated the audience with soft-classic clean vocals at times and with hard grunts and screams (his guttural vocals reflect the desperation in e.g. “Light in the Night” optimally) at other times and mastered both male parts without any problems. Sometimes he even sings so high pitched that one could confuse him with Scherff; an indication for the perfect interaction of their voices. This goes for the individual songs which have a lot of polyphony and antiphony as well as the whole album which contains joint songs and solos during which the other one only sings during the chorus. This makes “To Hell” even more dynamic.
Aside from vocals, Faber is, as usual, featured on the bass and only recently has started to also take over guitar parts, of which there are many, due to the gap that Veith Offenbächer tore. He did, however, take on three solos and thus is featured on the album as usual. This also goes for the third old hand Dirk Raczkiewicz who is making the keyboard glow again, as this melodic instrument is still used frequently. The only one missing now is the drummer, a position that has caused the band a lot of trouble. With Philipp Bock they finally seem to have found someone worthy of the position who does great work and noticeably enriches songs like “Life” (the liberation is enhanced by using the cymbals).

Making out the album’s strongest song is not easy, as the differences and diversity of the songs are what make the album. My personal favorites are the three consecutive tracks "Burn in the Fire", "Only the Ocean Knows" and "Light in the Night".
The former being supported by top-class guest singers: Björn Strid (including Soilwork) and Zak Stevens (including Savatage). Both exhale at their jobs and perfectly fit into the concept.
“Burn in the Fire” is a superlative song which mainly impresses with the interaction of Scherff-Faber-Strid and their quick shifts – this creates a catchy dynamic throughout the entire song!
With “Only the Ocean Knows” it is quite similar, whereby the choral chorus is especially catchy and Zak Stevens already makes the beginning of the song unforgettable. Intense lines like "Beat me, kill me, I don't care, we meet again in Hell" from Jeanette support this.

After all the hardness, all choral elements as well as the perfected orchestration, the album ends comparatively calm with “Forgive”. Faber doesn’t only sing this song by himself, he is also only accompanied by two acoustic guitars. The fact that he played those himself contributed to the emotionality of the songs which slowly turn polyphonic – a truly touching and worthy finish!

Summing this up, “To Hell” is a dynamic, catchy album with much polyphony and a strong cast throughout, divinely composed from the first to the last minute whose content and music complement and strengthen each other. Words like fire and water, guilt and expiation, hatred and forgiveness, good and evil are thereby gaining importance and the entire album shows an incredible intensity.
Dawn of Destiny delivered again in a very short time. They created a textually emphatic album full with musical expressive power. I’ve been trying for a few weeks now to get tired of hearing it, it was impossible. They did it again – this time irreclaimable!