On September 9th, 2015 a sad day broke dawn in Weert when Seventh Sin celebrated their Farewell Show in the Muziekcentrum De Bosuil. But despite the sad occasion, the singer Monique Joosten seemed, as the title suggests, positive about the future – referring to all the band members. 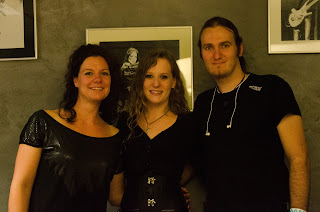 A positive atmosphere was already dominant in the afternoon and the excitement for the upcoming show was great. After the sound check, which already presented a special surprise with Tasmara Reuling (more on that in the concert report), we had the honor of being able to conduct a video interview with Monique and her colleague at the keyboard Vincent Reuling. We obviously talked about the farewell show and their following plans. Since it was the last interview, the album didn’t play that big of a role; our questions where rather about nostalgic memories as well as the band history and their highlights. Furthermore, the two talked about their start with Kamelot, a romantic backstage story, their attitude towards contact with fans and their reason for splitting up was not kept a secret either. Since it were Monique and Vincent who, unfortunately very late, made me notice the band at the Female Metal Event I, it was especially great to talk to these two – mainly because both of them turned out to be very likeable (“super nice!”) and naturally endearing. Realisart! wishes the whole band all the best for the future – we will stay tuned!