Aevum already taught us that there are some incredible metal-formations in Italy and this was proven again with the discovery of Ancient Bards. The Symphonic-Epic-Power-Metal-Band convinced from the beginning and vaulted themselves directly onto the olymp of the favorites, something that only has happened ones before (Dawn of Destiny, 2009). As described, the band managed to excite everyone live at the Wacken Open Air and thus it was a special honor to be able to interview two band members on the same day (video below).

It was the singer and front woman Sara Sqadrani and live-guitarist and backing vocalist Simone Bertozzi who didn’t only make the Italian sun shine in Wacken but also in the press tent. 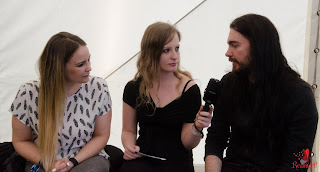 I talked to the both of them about their show at Wacken, the festival itself, their music and the “Black Crystal Sword Saga” with special focus on the latest album “A New Dawn Ending”, Final Fantasy, the cooperation with Fabio Leone (Rhapsody of Fire), the legendary “A Capella Routine” (Elton John would be proud), their personal favorite songs, a funny backstage story and plans for the future (Will the story continue?). We also talked about Simone’s state within Ancient Bards – We can only hope that maybe he’ll become a set band member soon, it would be well deserved!

Link to the Youtube-Video:
https://youtu.be/7XGnot3DeOE

Link to the bands audience in Wacken:
http://www.realisart.com/2015/08/concertreport-photos-ancient-bards-at.html