"But it turned out to be fucking phenomenal!"
Translation: Hanna Häßlein

After the first two video-interviews on Friday the 31st of July, 2015 at the Wacken Open Air, it didn’t take long until it continued with the next strong musician: Mikael Stanne from Dark Tranquility who is not only responsible for the vocals but also for the band’s deep lyrics. Visually a mixture of Irishman and lion, he turned out to be a friendly, calm Swede who does indeed have a predator deep inside him which he regularly lets out on stage (see pictures below). 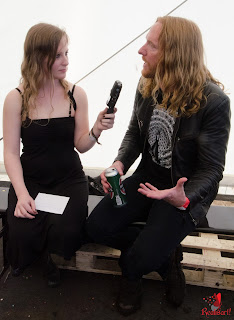 The band already had their show the previous day on the Headbangers Stage (link to pictures and report below), yet, they stayed another day at the festival. This opened up the opportunity for a meeting during which Dark Tranquility’s show at Wacken as well as the festival were addressed. Furthermore, we were talking about the music itself and about the emergence of the genre “Melodic Death Metal”, the latest album “Construct”, the overcoming of tough times, what Mikael hates about himself, the importance of good equipment, stories about their youth (when the cassette had to be rewound and turned) and the truth about backstage. As Dark Tranquility’s members once approached the project “band” completely inexperienced, there were also a few personal suggested the singer gave for such a start. 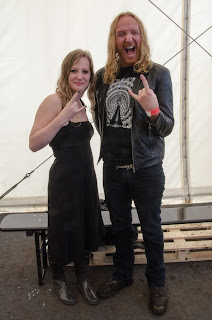 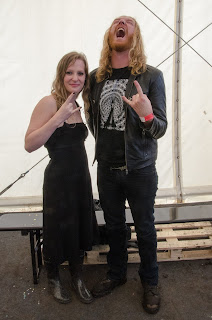 
Link to the Youtube-Video:
https://youtu.be/4R9U0WAZjVI

Link to the bands audience in Wacken:
http://www.realisart.com/2015/08/konzertbericht-fotos-dark-tranquillity.html