"The weather drove them in and the music made them stay!"
Translation: Hanna Häßlein

I felt quite similar to the audience of the American metal band Deadiron on August 1st 2015 at the Wacken Open Air. A friend brought me and the band together, they kept me there.

The Wacken-interviews were initially supposed to be finished with Beyond the Black – but then Leonid came. Craving’s bass player surprised me with an interview he had arranged. First, I almost felt hatred (:D), sometimes there just are situation in which one can’t say no. This moment, however, turned into gratefulness fairly quickly as the guys turned out to be thoroughly pleasant. And since the "Bassschlampe" told me, that they also are very humorous, it was a done deal.
At the end, neither the fact that I missed the band’s show on the W.E.T. Stage nor that the music was completely new to me could keep me from agreeing to a spontaneous video-interview. 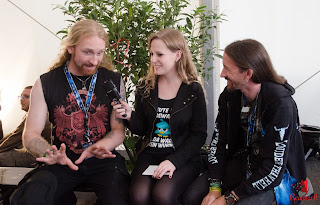 Initially it started out with Alexander Van Ness (vocals) and Jay Bennett (bass) but soon Tyler J. Harvey (lead guitar), CJ Langmack (rhythmic guitar) and Thomas Walling (drums) joined in until the whole brigade was present at the end. Amongst other things we talked about a special plane-party, the band’s Wacken-show and the festival itself, other bands such as Cradle of Filth or Suicide Silence, Deadiron’s musical style and the true-to-life lyrics, the debut album “Out of the Rust and Ruin” and naturally their latest album “Into the Fray”, coming tours, a funny backstage-story and schnitzelpizza. Furthermore, there were charming German-attempts from and with Alex as well as a skillful improvisation. No doubt one of the craziest-funniest Realisart!-interviews and one of my personal favorites. 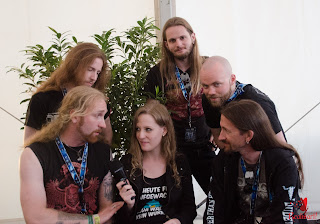 Deadiron have their roots in Ohio and were in Europe for the first time. For that, Wacken is probably not a bad place to get started and their show certainly was anything but dreadful. The same goes for their music. While “Out of the Rust and Ruin” is a good album which mainly sticks out due to the inexorable insertion of punk elements, “Into the Fray” is the absolute masterpiece. In it the band developed their style to perfection. While the punk decreases a bit, the melodic parts are increasing. Alex’s comparison of the guitar parts with the Goetheborger Schule is like chalk and cheese. Getting out the air guitar during many parts can barely be avoided. The melodies catch just as much, as do the vocals lines and the diverse, sometimes rough vocals in general. It is a catching piece, which shows individuality even though there are many other style’s influences. The true-to-life, sometimes really dark lyrics are captivating. Definitely a recommendation – “Welcome to Deadiron”!

Link to the Youtube-Video: https://youtu.be/X7GN4F38YDo