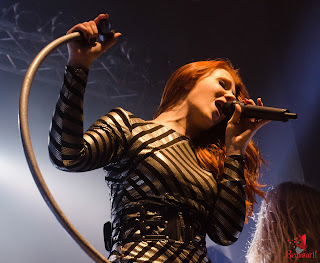 This was done by Epica on the January 1st, 2017, who are currently on their The European Principle Tour with Powerwolf. At the Capitol Hannover they amazed their audience by delivering a great performance just as expected. 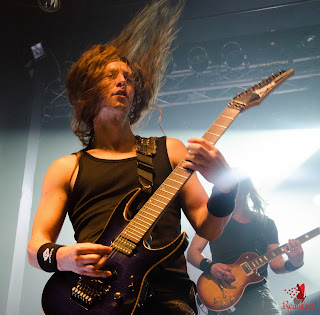 The six musicians brought along their new super-album “The Holographic Principle” which dominated the concert by making up 7 out of the 12 songs on the set list. Considering the song’s general quality as well as their quality as live-songs, this was certainly not a mistake. The intro & opener “Edge of the Blade” already proved this to be true as the band performed them convincingly from beginning to end. Even the repetitious performances of “Cry for the Moon” and “Consign to Oblivion” couldn’t scare off – two great song who, however, are not the only songs on the particular albums. Switching it up at times wouldn’t hurt. As the only remnant of “The Quantum Enigma”, “The Essence of Silence” made it onto the set list which was really nice. 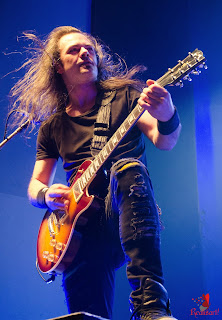 Aside from the songs, one could also count on the musicians who played out their strengths as expected. Simone Simons (vocals) excited not only with her voice but also with her warmth, her humor (she asked to be tutored in synchronized handbanging) and her consistent use of the German language. Mark Jansen (grunts, guitar) managed to do the perfect splits between rumbling into the microphone and hitting the strings hard while always staying mobile and expressing his joy of playing through flowing hair and a good laugh. A good atmosphere amongst the audience was also supported by the combo Isaac Delahaye (guitar) and Coen Janssen (keyboard). These two didn’t only constantly interact with each other and fooled about but also expressed their deep love creating a heart ;). 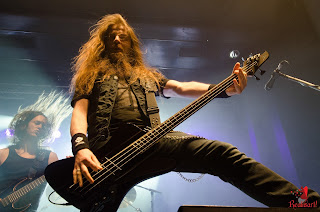 And aside from all that they also played their instruments. Isaac had the opportunity to demonstrate his guitar skills during a solo part and he also proved to be quite good as a supportive grunter. Coen, on the other hand, switched around between the mobile and the stationary keyboard, the latter drawing attention to it as it turned and moved. Furthermore, the keyboard-artist apparently almost gave the security guy a heart attack when he fearlessly jumped into the pit to be closer to the fans. 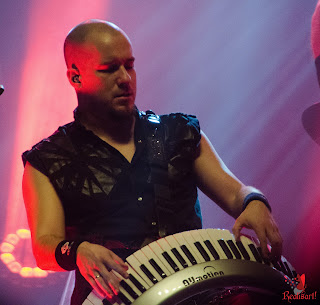 Rob van der Loo (bass), whose performance was something between a bastion of calm and a grizzly on ecstasy, left a deep impression as well. He moved around on stage like all the other band members except Arien van Weesenbeek (drums) who, no surprise there, mainly stayed in one spot. Every now and then, however, he got up from his stool and thus stayed present through acoustics as well as visually.
The lights played a big part in this as they were outstanding this evening. Epica knows how to show themselves from their best side, emphasis on “show”. The band travels with their own light installation which is used often while not neglecting their own visibility. This gives the audience the opportunity to perceive all actions and emotions on stage in their entirety – starting with the front woman all the way to the drummer. In addition to that, a lit up triangle completed the look on this day – a new element that was added for “The Holographic Principle”. 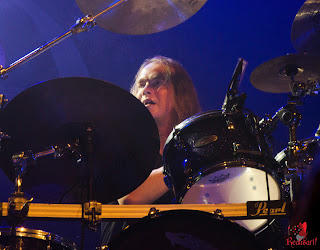 Aside from the new addition, the band still counted on their tried and true dynamics and made sure to include the fans at all times. With hilarious entertainer-skills, Isaac “pitted” the audience on the ground floor against the audience on the balcony and Mark grabbed his Guy-Fawkes-mask since someone wore it in the audience, even though this wasn’t planned for this evening. This made the night very personable, especially when considering the great success of Epica.

All over, this was a great success and the new album’s and live performance’s verdict confirms this and already excites for the band’s next tour! 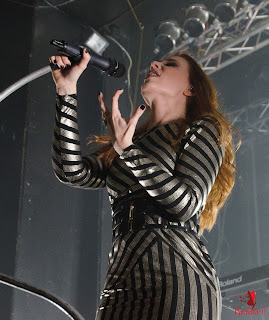 Setlist:
1. Eidola
2. Edge of the Blade
3. A Phantasmatic Parade
4. Universal Death Squad
5. The Essence of Silence
6 Ascension - Dream State Armageddon
7. Dancing in a Hurricane
8. Unchain Utopia
9. Cry for the Moon
10. Sancta Terra
11. Beyond the Matrix
12. Consign to Oblivion