"A Girl is always nicer to look at!"
Translation: Hanna Häßlein

…is nothing I can confirm after my meeting with Kamelot’s Oliver Palotai on the 20th of September 2015, only two days after the concert in Cologne. We met the attractive and friendly keyboard-player, who isn’t only responsible for his instrument but also for the entire orchestration and part of the songwriting, in Zeche Bochum. 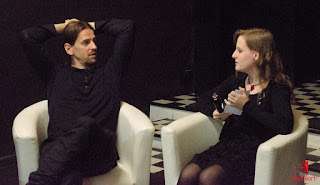 The video-interview we talk, amongst other things, about the latest album Haven and the corresponding tour, why there was no keyboard solo this time, Kamelot’s artwork, the dear family, German fans, mulit-cultural handling, Thomas Youngblood’s young blood, firefighter/singer Tommy Karevik and Alissa White-Gluz, the songwriting, using naiveté and the dangers of it as well as Oliver’s personal book and song recommendations. And as if this isn’t enough and since we both come from Germany, we did this in English (well…we’re trying, at least :D)

For those, who would like to experience the Haven-Tour themselves – you are in luck. In 2016, Kamelot will continue to tour through Europe, the dates will be released soon. More of the band’s plans for the future can also be found in the interview.